The Big Day Has Finally Come… 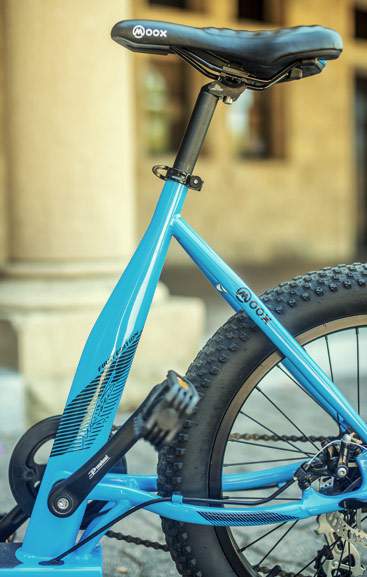 So the big day has finally come….it’s time for me to release this crazy Moox Bike idea to the world.

Sometimes I’m really not quite sure how I (and we at Moox) got to this place. After all, one day, I was happily riding along on my “traditional” bike, and the next, I was compelled to create a new bicycle that involved some crazy scooter platform adaptation. But the people who know these things tell me that that’s how new (and sometimes even good) products are born, and that by running with my bike-scooter hybrid ideas, I’d be considered an inventor, something I’d never really considered myself before.

What I do know is that this journey has been quite an odyssey. I started this endeavor with just two crusty used bikes and few pieces of raw steel. In true garage-inventor style, I chopped the bikes up, welded some stuff onto their pieces, and – boom! – I had the very first bicycle-scooter prototype which I’d tentatively named the “Oomego” (you know, as in “Ooh, me, go!). And boy, it was not at all pretty.

And while that first Oomego prototype technically worked, it was definitely not even close to ready for market. And so I began the many interesting (and sometimes frustrating) steps it would take to get us to where we are today: the Moox Bike, in all it’s green glory. With the help of many, the bike was prototyped, incubated, fabricated, contemplated, and iterated.

It’s taken more than 18 months of hard work and many, many helping hands across multiple continents to get the Moox Bike to the state you see it today. And while this is only the first step of many that we have planned for the Moox Bike vision, I am very excited and proud to be able to finally offer to the world.

The Big Day Has Finally Come…